From the year 2005, there was a rapid shift in the usage patterns of the guar gum. Before then the major demand sectors for the guar was the food grade which consumed over 50% of the domestic production. There was also some demand for the fast hydration guar gum powder used in the paper and the cosmetic manufacturing.

This however changed when guar gum usage was directed to the oil and gas drilling operations. This industry now forms the bulk of the demand for the guar gum. Demand for the product has reached up to 70% of the total production. The rest is taken up by other industries such as textiles and food processing.

The prices of this product have a very high positive correlation with the shale gas exploration. Negative price movements have had major impacts on the overall well being of the industry. 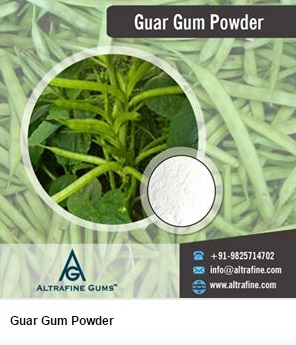 To counter the effects of these forces, strategies must continue to be developed that will help maintain the demand of the product.

Hydrocolloids are substances that form a gel in water. They are comprised of heterogeneous groups of biopolymers, which rapidly form viscous dispersions when introduced in water. These substances play very important roles in various industries.  They are mostly used as thickening and gelling agents.  Natural hydrocolloids used as thickening agents include; starch, Xanthan gum, guar gum, gum Arabic and the locust bean gum. Those used as gelling agents include the carrageenan, cassia gum, alginate, gelatin and agar. They are also used as food stabilizers.

The cassia gum exhibits properties similar to other hydrocolloids and is used as a stabilizer in foods, emulsification, enhancing moisture retention, improvement of texture and in the beverage industry.

Despite of this, it has not been widely to the same extent as the other hydrocolloids. Some of factors affecting its usage include;

The average growth rate of the Cassis gum is expected to be moderate between the year2016/2017. There is currently increasing awareness on the presence of cassia gum which functions equally well as the other hydrocolloids, and also equally affordable. 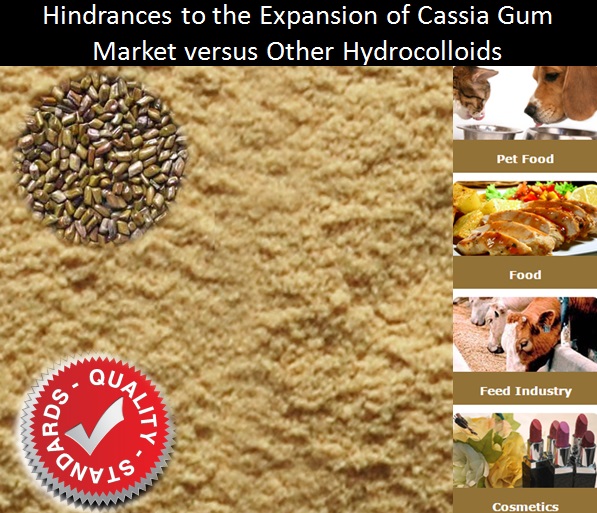 The regulatory bodies in various countries have also approved the usage of cassia gum powder and related formulations for use in industries such as in dairy, pet foods and confectionaries. This is expected to cause a gradual upward trend in the sales and demand of the product.

The cassia gum is largely produced in China and India where there are favorable weather conditions for production.  A closer look at these areas and it is worthy to note there are no quality standards that guide the production and processing of cassia. Lack of these standards has meant consistently poor quality being produced and exported, thus creating a barrier in market expansion.

Rain Fed production of the cassia gum in the Indian subcontinent has also been a factor affecting the overall production. Decline in the levels of the monsoon rains have a direct effect on the production volumes and may create a supply shortage.

According to reliable market research, cassia gum main markets are the animal food industry being the major consumers, Dairy and confectioneries and meat processing. It is also used in cosmetics, pharmaceutical, paper and chemical processing and to an extent in mining. When compared to the guar, the major demand driver is the oil and shale gas exploration sectors which consumes vast amounts compared to the animal food industry. This has widened the gap in market levels of the cassia gum.

Despite the imbalance in usage of cassia in different industries, there is growing awareness of the availability of cassia gum as a viable alternative to other hydrocolloids.  Demand in the cosmetic industry is expected to rise by over 48% by the year 2025, driven by the hair care subsector. The main consumer region is expected to be North America.