The fenugreek is biologically referred to as Trigonella Foenum-graecum. It is legume that has been discovered to have wide ranging uses such as:

There has been a lot of research in the pharmaceutical industry about the fenugreek gum powder which has led to the emergence of new uses for the fenugreek powder. The major Nutraceutical properties include: 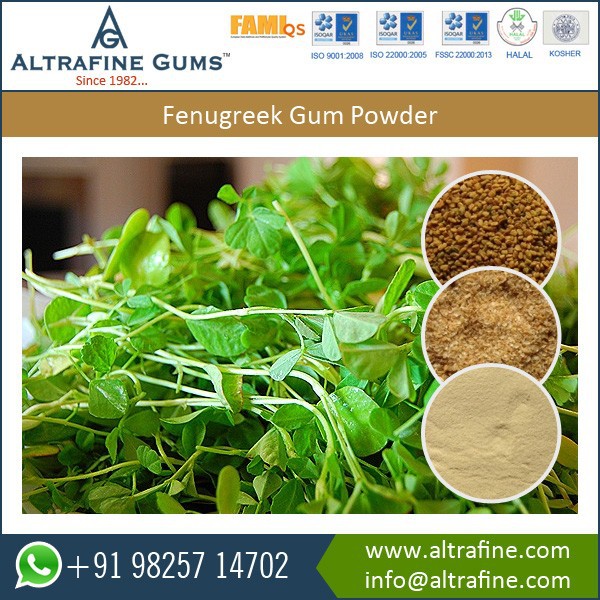 Beneficial Effect on the Blood

The Fenugreek has been discovered to have an immense ability to cleanse the blood, or act as a diaphoretic. It acts as an important factor in detoxification of the body. As an antioxidant, the gum contains phenolics and flavonoids molecules that promote the antioxidant activity. These have huge beneficial effect on the liver and the pancreas.

From the aroma of the plant, it is used to clear the smell of sweat with that of the gum. When consumed it has a tendency to create a nice scent from the body and shadow bad odors.

The plant has also been seen to purify the lymphatic system through its ability to “irrigate cells” with nutrients as well as remove the wastes, dead cells, and even locked up proteins in the body. It is important to note that blockage in the lymphatic system leads to poor fluid circulation pain, loss of energy and disease.

The gum from the plant, when used as a food additive helps maintain the mucus levels in the body, especially in the lungs. This makes it efficient in cleansing the lungs and relieving of congestion.

The Fenugreek gum powder is under research as an important complementary therapy in cancer patients undergoing chemotherapy interventions. Research has shown that the fenugreek gum is used as a starting material for development of steroid hormones such a cortisone and progesterone.

In photochemistry, the most important compound is the 4-hydroxyisoleucine, which works in the regulation of glucose metabolism.Other compounds in the gum that work in glucose metabolism are the trigonelline, galactomannan, and trigoneosides.

The fenugreek gum powder increase viscosity with increase in temperature. It also exhibits the non – Newtonian (sheer thinning) viscosity characteristics. Due to the fully substituted backbone, the gum never interacts with other hydrocolloids.

Unlike other hydrocolloids, the fenugreek is unique in reducing the surface tension of the fluid. From this concept, the gum helps to prevent the fluid mixture against flocculation and coalescence. This factor, combined with the water holding ability of the gum has now opened up research in the use of the gum for manufacture of cosmetics.

The fenugreek gum has recently gained popularity as a hydrocolloid with major uses in the world. Its main uses are in the food industry as a thickening and emulsifying agent. It also has immense nutritional value as a fiber as well as spice that adds aroma to the food.

These properties have also enabled the gum to have significant usage in the pharmacy Sector.

The Guar gum is a natural plant extract obtained from the endosperm of the guar seeds. It has recently been seen to have numerous applications in industries and also in medicine.The Water soluble fiberin the guar acts as a laxative hence is used in promotion of regular bowel movements and as a reliever of constipation. Some therapeutic properties include;

This is a condition which develops when pouches form in the walls of the colon. These are very small in size (less than 10 mm). Later they lead to the diseasediverticular disease which is a painful condition. Medical research has shown that diet with high fiber or roughages help in production of stool that bulky and easily move through the large intestines. The guar gum is a good ingredient that can be used for this condition. 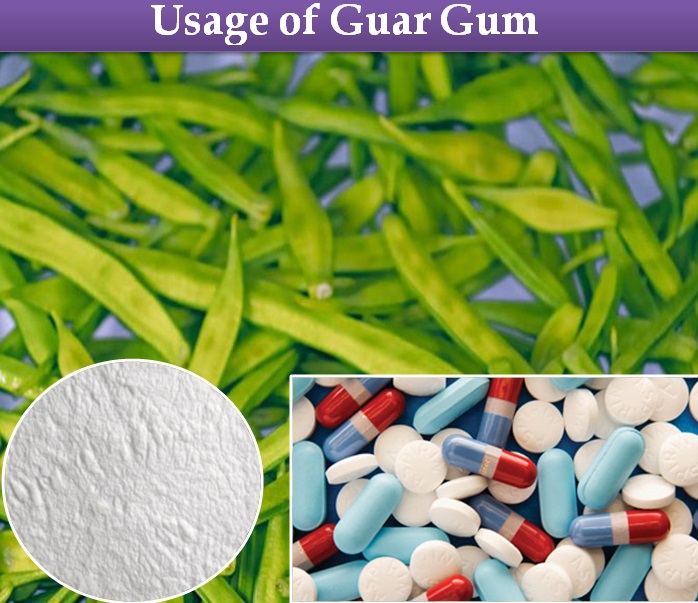 Consumption of partially hydrolyzed guar gum has the effect of reducing the post prandial blood glucose absorption uptake which occurs in the small intestine. This has the effect of regulating the glucose level in the systemic circulation. It also acts as an agent for controlling the release rate of active ingredient in medicine.

This is a disorder in the small intestine that occurs mostly on the right side of the colon. It is an inflammatory disorder, where the bacteria residing in the gut invade the bowel causing the disease.in the management of this disease; doctors prescribe medicine that will aid movement of contents smoothly through the intestines. Guar gum acts as the laxative that is effective in the alleviation of these symptoms.

Partially hydrolyzed guar gum is also used in the prevention of “Iron Chloride induced arterial thrombosis” and hyper-lipidermia a high fat diet. Research has shown that the granulated form of guar gum can be used in the management of hypercholesterolemia. The suffocated degraded form of the guar has been found to reduce cholesterol and fibrinogen very effectively from the body.

Ulcerative colitis begins as a colon inflammation to the rectum. Rectal bleeding is the culmination of this disorder. The bleeding is a result of small open sores or ulcers. This leads to abdominal pain and frequent need to empty the colon. Guar gum remains the most popular g-free substitute ingredients in flours and helps to understand what part of the gluten molecule is actually the problem for celiacs.

The partially hydrolyzed guar gum has also been found to be effective in the management of Diarrhea and cholera symptoms in adults. It undergoes fermentation in the body to release fatty acids that are helpful in treatment of diarrhea when combined with oral rehydration solutions.

Research has also shown that the partially hydrolyzed form of the guar is active in the management of constipation as it enhances the bowel movement and eliminates the risk of colorectal cancer.

There is evidence from research that this modified form of guar prevents development of cancerous cells by inhibiting carcinogen-activatingenzymes, and promotion of the carcinogen detoxification enzyme called glutathione-s-transferase.

Increasing medical research shows that the guar gum has important therapeutic properties. The most important characteristic is its high fiber content and therefore acting as excellent roughage for the body. The roughages play a great role in movement of food through the digestive system. Recently the product has also been used in regulation of blood glucose.

The plant-derived polysaccharides function as good stabilizing and thickening agents, and are major components of processed foods. The cassia gum falls into this category, allowed up to a maximum level of 0.75% in food. It is used mostly in combination with other colloids for these functional effects including moisture retention and texture improvement. 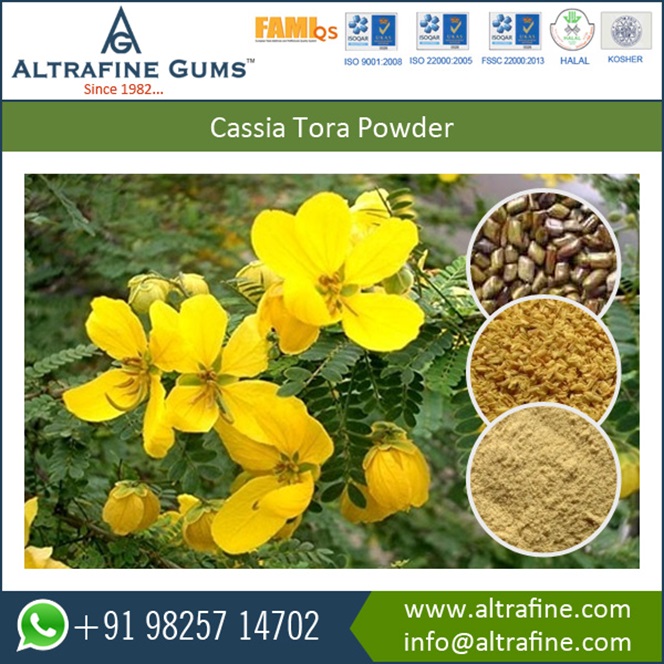 Recognition as a safe product depends on;

The cassia gum has at least 75% polysaccharides with a linear chain of mannopyranose and galactopyranose units in a ratio of 5:1. This formula is revealed through a sugar analysis using the HPLC method.

Cassia gum has been approved in the Europe under the commission directive EEC No. E499, and is listed in the annex of the council directive (70/524/EEC) as a stabilizer, thickener as well as gelling agent in the manufacture of canned pet food. It is recognized as a “GRAS” for use in food up to a maximum level of 2%.Main uses are in baked foods, cheese, jams and jellies.

In Japan, cassia gum is recognized as a food additive by the ministry of health and welfare under announcement number 160(10/08/1995).

The United States has recognized cassia gum for usage as a thickening agent in human and pet foods. Research done has available data showing that the gum has no toxic effects on animals and human beings. From the panel of experts review in the united state, cassia gum has been “Generally recognized as safe” (GRAS) in the conditions of use as a thickening agent in foods.

In Australia, it is approved for use in the Australian market by the government.

Independent research done By FAO concluded that the cassia gum is stable agent of any chemical modifications for a minimum of 20 months. Any changes detected are within the limits of specification. The gum is hygroscopic until a moisture level of 8 – 12% is achieved. The cassia powder, when used at the recommended levels and it does not interact with the nutrients. There are also no degradation products from cassia gum in the foodstuffs.

The cassia gum powder is a natural polysaccharide that is a good thickener and stabilizer used in the food & pet food processing industry. It has been recognized as a safe product globally after intensive research, and has been classified as “Generally recognized as safe” in food when used according to the stipulated levels. The product has also been approved for use in most countries through official registration, such as in the European Union, USA, china, Japan and many more nations around the world.